Mario Kart it is a very popular game. The Nintendo racing kart game give us our favorite characters from different Nintendo franchises, in an amazing and very fun game. Perhaps that’s why it was strange that the mobile version didn’t come sooner, but at Nintendo they wanted to do it right and they’ve done it, except for a couple of details.

Mario Kart Tour is played with on-screen controls. It has a very fine and well-achieved handling system that includes the drift system of the console versions. It is very easy to handle the different karts and notice their differences in speed, as they take the curves, etc. The controls are intuitive, simple, easy to adapt. The gameplay has been greatly polished and you can feel it when the race starts in the different tracks.

Graphically the game is remarkable, each animation feels so fluid. The characters are very well designed and are loyal to their respective brands. The interface is very well adapted and it is difficult to find any but a loose point in both sections. The music is correct. Although it does not stand out in a special way. We can hear classic and well-known songs from different games.

The game gives us a lot of things to do. We have many competitions, game modes, the number of tracks is more than adequate and is multiplied by having different challenges in each level. We have an online mode, although in the beginning was somewhat misleading since the races make us believe that we compete against other players, when they are just IA characters of the game with different names. But now, there is a full multiplayer mode where we can compete against our friends around the world.

Mario Kart Tour is a great game, however, it includes micro transactions which may be the low point of it. They are needed it to unlock things, characters, scenarios, etc. And it also includes a subscription mode, which would bring the online competitive mode. If you want to squeeze the whole game, you’ll have no choice but to go through the store and buy some coins.

Download Mario Kart Tour in the Google Play Store or App Store. It is free for Android and iPhone mobile phones.

Mario and friends go global in this new Mario Kart as they race around courses inspired by real-world cities in addition to classic Mario Kart courses! These destinations will be featured in tours that rotate every two weeks! In addition to courses based on iconic locales, some of your favorite Mario Kart characters will get variations that incorporate the local flavor of cities featured in the game! 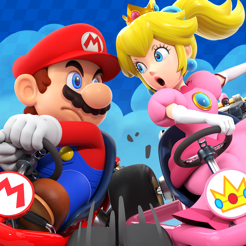 The All-Cup Ranking grades players from across the world based on the total points for all cups during each #MarioKartTour tour. The top 1,000 places will be rewarded with a special badge of the original Super Mario Kart! Follow the link for the rankings. https://mariokarttour.com/en-US/ranking/allcup

We just extended the event! Grab event tokens scattered throughout #MarioKartTour courses and exchange them for items at the Event Shop. Event tokens can come out of the Coin and Coin Box items too!