Download the best UFC game. Download EA Sports UFC and enjoy the best fighting and martial fighting game on your Android or iPhone for free.

If you are a fan of the UFC (Ultimate Fighting Championship) this is the best franchise game for mobile phones. Download and fight alongside your favorite fighters, among them, Caín Velásquez, Georges Pierre, Jon Jones, Chris Weidman, José Aldo, Johny Hendricks, and others.

This is a fighting game. An octagon-shaped ring where we face off in one-on-one duels. Competitive combat and good rewards after every fight we fight.

The game has a roster of more than 70 fighters separated into four divisions. Each athlete has their own special set of movements. If you win battles, you will be able to unlock new opponents, get coins and level up your skills. Part of the game mechanics is to improve our characters through an RPG system.

Graphically EA Sports UFC is very well achieved. The UFC’s best-known faces are instantly recognizable and have very fluid animations. Combat movements are highly detailed and varied. The controls respond very well, so we can easily perform many fighting movements.

The game features events related to the events that occur in the UFC. So you can recreate the fights of the next events in the UFC on television. That gives the game a lot of activity and allows us to follow the UFC news on our cell phone.

Likewise, it has an online player versus player mode and a ranking system to be able to position ourselves at the top as we develop our characters. Those ranked matches are very fun and will requiere our best skills in battle for the win.

EA Sports UFC is the official game, it requires a permanent Internet connection. It is free, but it includes some micro payments.

Step into the Octagon® with EA SPORTS™ UFC® for mobile! Collect your favorite UFC fighters, throw down in competitive combat, and earn in-game rewards by playing live events tied to the real world of the UFC. EA SPORTS UFC brings the intensity of MMA to your fingertips like never before. HD-quality visuals, intuitive touch controls, and action-packed gameplay create a unique combat experience for novice and veteran fight fans alike. 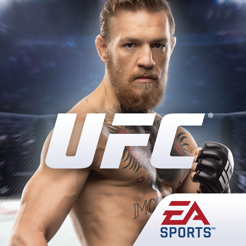 New Truth or Dab with @stylebender and @anthonyfjoshua is live now 🔥🥵

Check out @AngieOverkill vs @Snip3down in a #UFC4 matchup you don't want to miss ⬇️
http://twitch.tv/ufc

Tomorrow @stylebender and @anthonyfjoshua take on @seanseaevans and the #HotOnes wings of death in Truth or Dab! 👀🍗